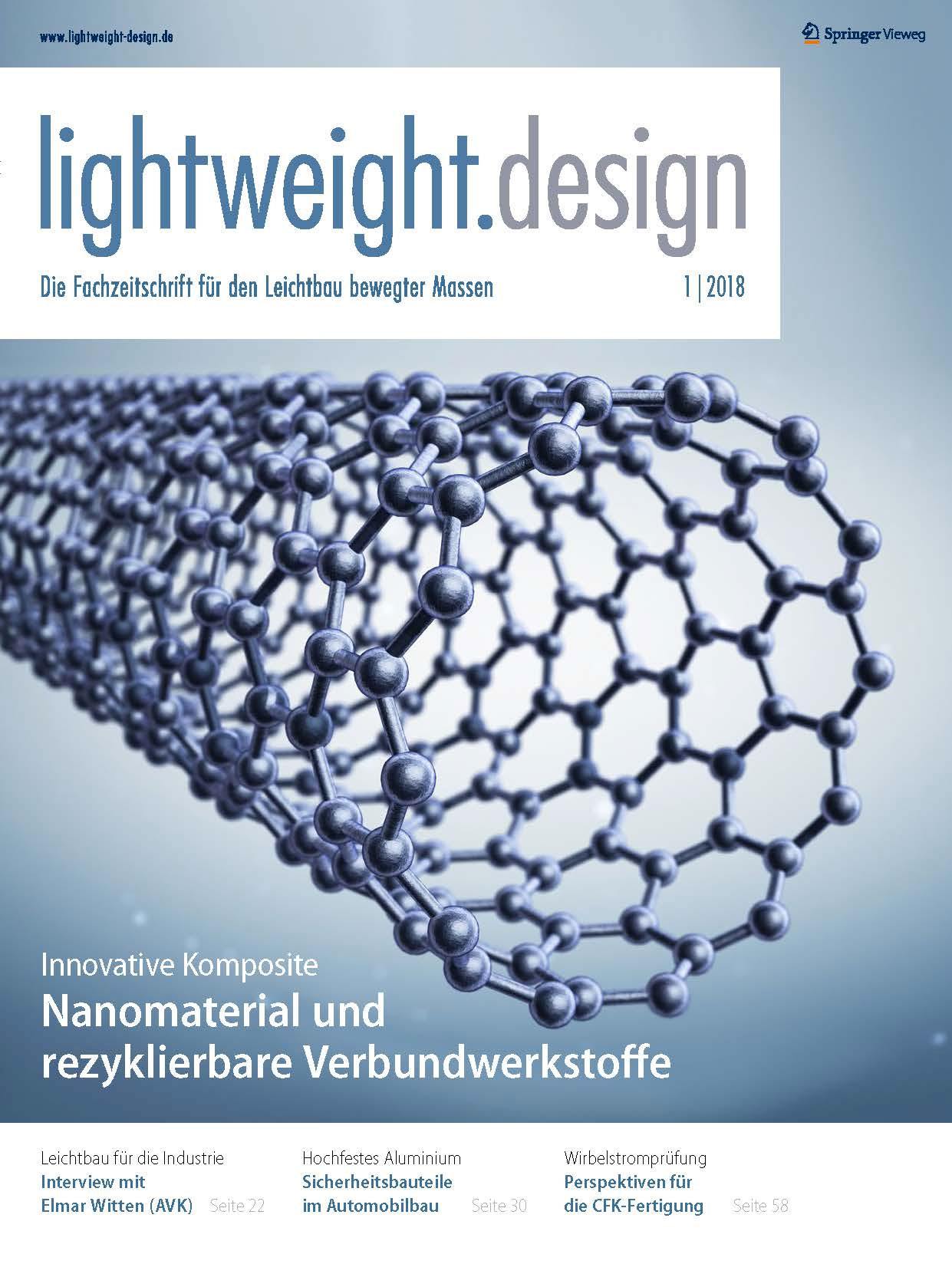 07 Jan Article in the magazine LIGHTWEIGHT.DESIGN

C6 Composite Tooling has developed a saw that is usable in a five-axis machining center for fiber-reinforced polymers. Its cuts eliminate delamination and are free of fiber projections, while maintaining a high feed rate. It offers a cost-effective alternative to milling for processing aircraft fuselages and car body parts.

It is not just the automotive industry where faster cycles and minimal manual rework count – process optimization is also gaining importance in the aerospace industry. To meet these requirements for cutting Fiber-reinforced Polymers (FRPs), C6 engineers have developed a solution for sawing modern composites.

The composite material saw known as the straight and curve adds additional dimensions to the familiar linear saw cut and paves the way to saw free-form components using a five-axis simultaneous machining center, Figure 1 and Figure 2. This allows the saw to compete economically with a straight milling operation with all sawing advantages maintained.

The tooth geometry of the solid carbide saw also allows delamination production cuts without any fiber projections. As a result, no more additional smoothing with a milling tool is needed. Besides these savings, efficiency is further boosted thanks to feed rates of up to 20 m/min.

The main saw body is made from carbide, with the circumference and flank cutting teeth ground into it. A detailed representation of the tool in Figure 3 shows how the flank and circumference cutting teeth are arranged. Depending on the application, the saws can be finished with a diamond coating.

The disc-shaped body with its central bore is clamped into a retainer, which can be fitted with a hollow shank taper (German: Hohlschaftkegel, HSK), steep taper (German: Steilkegel, SK) or conventional shaft.

The saw cutting widths for five-axis processing range between 1.5 and 2.5 mm depending on the saw component material and diameter. A cutting width of 1.2 to 2 mm is recommended for exclusively straight cuts, allowing cutting forces and dust formation to be reduced. A further important variable is the number of teeth. A saw with an external diameter of 70 mm can easily accommodate up to 180 teeth, in which case the spiral direction of the circumference cutting teeth can be arranged in opposing groups. This arrangement helps optimize cutting quality and maximize processing feed rates.

Difference to a Brazed Saw

One key aspect here is decoupling the circumference cutting teeth from the flank cutting teeth, Figure 3. This allows both types of cutting teeth to be ideally adjusted to requirements and is infeasible, for example, for conventional carbide- or diamond-tipped brazed saws. While grouped cutting teeth may be used, a similar effect cannot be obtained in this case.

Another difference in the designs is the type of flanked arrangement used. While conventional brazed saws feature a section of non-cutting main body between the teeth of the tooth rim, the flank cutting teeth in composite material saws are arranged adjacent and flush. This means that chipping space and free space follow on from each other, as shown in Figure 3. The flank cutting teeth form a continuous ring.

This design underpins the ability to saw curved paths. The flank cutting teeth prevent a non-cutting main body from coming into contact with the machined material, which would otherwise generate unintended thermal stress.

The Saw in the Process

The rotation direction is not important for a number of applications. However, in a number of cases – sensitive overlay films for example – this effect may be positively exploited to boost edge quality.

Sawing along a Curvature

Using the saw to work along a constant curvature in the feed direction means working with a defined radius. This case is shown in Figure 4 (left). After a short transition section at the start, the saw cuts the material exclusively at the front, marked in red in the figure. Depending on the material thickness, external diameter and insertion depth, the tool only machines the material on the inside of the curve to the center axis. Contour accuracy is produced in the center axis section. In this case, only the flank cutting teeth dictate the quality of the cut. Since the flank cutting teeth are not involved in the cutting process on the outside of the curve – circled in green in the figure – the offcut does not vibrate, or does so only slightly.

Increasing curvature in the feed direction occurs, for example, in an Archimedean spiral, when sawing toward the center. In this case, the flank cutting teeth are also involved in cutting on the outside, as shown in red in the green circle in Figure 4 (center). Cutting is effected with the rear section. This effect is also described as the post-cut of the tool. This effect can also be positively boosted by adjusting the saw in various ways depending on the degree of change in the curvature. We can now revisit the idea of rotational and counter-rotational direction, given the considerable effects at this point. The rotational direction used here allows for higher quality, despite the post-cut effect.

A gap between the rear section of the saw and the material exists with decreasing curvature. As with constant curvature, the saw cuts the material exclusively with the front section. There is no contact between the tool and the offcut in the green circle in Figure 4 (right).

Restrictions on saw usage may result from collisions attributable to the geometry of the component or the device structure. The use of a C6 angular head, Figure 5, can resolve the geometric conflict in this case, allowing the saw to be used free of all collisions. Figure 6 shows an example processing outcome.

Compared with a conventional milling tool, the FRP saw has a far wider applicable scope with regard to the materials processed. Besides cutting straight FRP components – produced using methods like Resin Transfer Molding (RTM) or wet pressing with warp thread – material composites with overlay films as well as copper or aluminum mesh are also suitable for processing with the developed saw. Processing other materials or material combinations is possible but needs testing.

The clearest benefits of the developed FRP saw are the high feed rates possible when processing and the high quality of the narrow edge produced, which pave the way to slash cycle times and minimize manual reworking. The reduced cycle time can, in turn, eliminate any need for an additional shift or even investment in additional machinery . A further positive side effect is the 85 % reduction in dust emissions compared with processing using a conventional shank milling cutter.

Components with long tooling paths and relatively large radiuses are predestined for the use of the saw – for example, processing stringers on aircraft fuselages or body parts such as roofs or engine hoods in the car industry.

You can get the whole article in our download area.